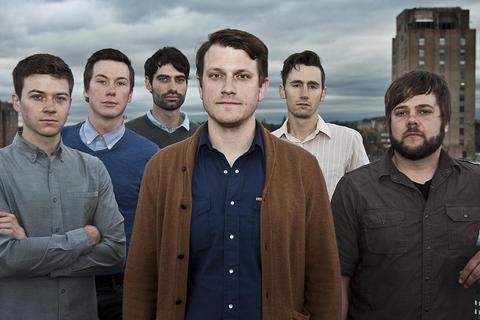 Five miles south of downtown Seattle is the neighborhood of Columbia City—a leafy stretch of old brownstones and new condos which, according to local legend and loosely interpreted census data, boasts the most diverse zip code in America. Not far from Columbia City's main drag, amidst a swirl of languages and colors and food and accents, sits a 100-year-old, two-story house that's home to the world-weary, six-piece orchestral-pop ensemble known as Hey Marseilles.

World-weary in spirit if not in practice: Hey Marseilles first won hearts across the US with its 2010 debut, To Travels and Trunks, an album that reveled in the education and inspiration only globe-trotting exploration can provide. With Matt Bishop's lyrical wayfaring abutting an instrumental palette that embraced folk tradition—accordion, strings, and horns; gypsy, Gallic, and classical—To Travels and Trunks gave musical
voice to the universal longing for unfettered freedom. NPR called the record "sublime and heartfelt."

A lot has changed in the world since 2010—that house in Columbia City, for instance. The vacillations of the economy allowed Hey Marseilles violist Jacob Anderson to acquire it in 2011; he and his younger brother, cellist and producer Sam Anderson, helped renovate it. Since then, most of the band has lived in it, and the entirety of their new album was written and recorded in it, or nearby. (Other recording spaces included a tunnel in Seattle’s Golden Gardens Park, a mostly abandoned brick office building, and a church sanctuary, all because of their advantages for the band’s acoustic instrumentation.) Not surprisingly, Lines We Trace is not about going out and searching. It's about finding you’re already where you need to be.

Make your way back home again, Bishop sings on the dusky ballad "Café Lights." I am here still.

“These songs articulate a sense of longing, but it’s a longing to appreciate what’s in front of you as opposed to finding meaning in somewhere or someone else, “ says Bishop. “It’s about finding and creating home where you’re at and as you are.” The 12 songs on Lines We Trace represent a band steady enough in its sound—poignant, panoramic, unreservedly gorgeous—that it can expand beyond it. The string section that hums throughout "Elegy"—quintessentially sweeping, Hey Marseilles style—shifts into finely composed abstraction for the song's final minute. Colin Richey's skittering rhythm on “Bright Stars Burning” is a gentle breakbeat, a sly nod to atmospheric drum 'n' bass. "Madrona" and the album-closing "Demian" are Hey Marseilles' first fully instrumental songs, a pair of echo-laden piano-and-cello dirges that are simultaneously solemn and sumptuous. "Dead of Night" trots along on an almost funky, waltzy swing and gives the album its titular lyric, trumpet triumphant as Bishop sings, The lines we trace have a thousand ends/We’ll count the ways we can’t begin/And stay in our homes, remain on our own…

Throughout, Philip Kobernik’s accordion is less pronounced than previously, Nick Ward’s guitar more so. The result is less old-world, more new school. “With our first record, we were inspired by traditional folk instrumentation and arrangements, but at our core we were trying to make solid pop songs,” Bishop explains. “We see this album as a continuation of that goal, but we hope the arrangements reflect our maturation as musicians and songwriters.” An update. A progression. A musical analog to a line in "Looking Back": If you’re looking back that’s all you’ll ever see.

Six years after Bishop first got together with Kobernik and Ward to jam at Seattle's Gasworks Park, Hey Marseilles is an experienced band with a slew of major festivals (Bumbershoot, Sasquatch!) and a national tour under its belt. They've come a long way—only to find themselves back home. Put another way, as Lines We Trace suggests, sometimes you don’t have to go far to find a meaningful experience. Sometimes the comfort of the familiar is all you need to grow.