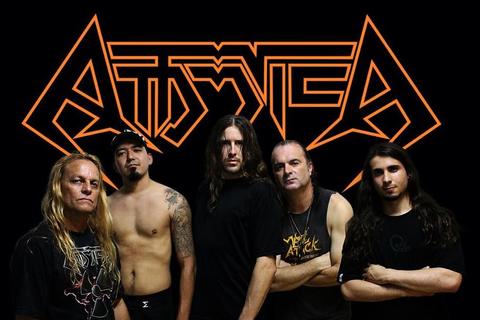 Attomica is a band that already has its name engraved with honors in the history of metal in Brazil. They started playing in 1986, their sound being heavily influenced by eighties thrash metal, which had been gaining ground and strength in Brazil.

Their classic album “Disturbing the Noise” was responsible for catapulting Attomica to the next level in terms of sound quality and success. The 1991 album took Attomica’s name not only to all corners in Brazil but also abroad and overseas. Alongside other major and contemporary rising Brazilian metal acts such as Sepultura, Oversdose, Korzus, Sarcofago, and Ratos de Porão, Attomica is to this day one of the most important names in Brazilian metal.

In 2012 the band has released their new studio album: Attomica 4, by Oversonic Music Label. This album was produced by Vagner Alba and brings together the band’s maturity and evolution in the most recent years. The songs are powerful, and continue with the traditional heaviness that has characterized Attomica’s style in all of their releases.

This album also marks the debut of singer Alex Rangel, who brings new influences and an incredibly powerful voice. Certainly Attomica is living the best point in their careers, and Attomica 4 will certainly be heralded and remembered as a classic as well.