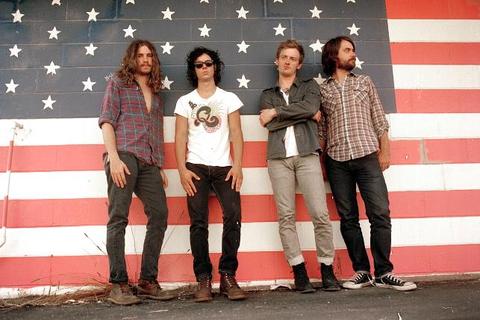 Clearly, the Turbo Fruits are not athletes. They are, however, a rock n roll band and one that could likely take your state rock & roll champion to the mat in less time than it takes to cue up a record. What the Nashville, Tennessee quartet lack in physical adeptness they make up for in wild abandon and unfettered debauchery; in buzzsaw guitars and pummeling, primal rhythms. And they STILL look good in a unitard and head gear. Okay, that might not be true – we haven’t tested that theory yet, there wasn’t quite enough beer, there may never be enough beer – but they are definitely one of the most visceral rock groups in America, as is evidenced on their new album Butter.

Recorded in eight days in Austin, Texas with Spoon’s Jim Eno at his Public Hi-Fi studio, Butter is the follow up to their 2009 Fat Possum album Echo Kid and the 2007 Ecstatic Peace debut. It’s a spastic, slab of fun-filled fury, a double-live-gonzo Athena busting out of The Flaming Groovies’ Teenage Head, thrashing its way through punk, surf, and power-pop and leaving a wake of blown minds and melted faces. Y’know, like a rock record is supposed to do.

Now let’s see if the state wrestling champion can beat that.