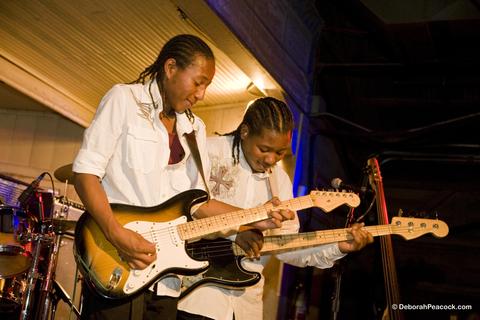 The Peterson Brothers were born and raised deep in the “Lost Pines” of Bastrop, Texas. Alex, 13, on bass, violin and vocals, and Glenn Jr.16 on guitar and lead vocals. Their music combines the classic blues sounds of legends with their own unique blend of soul-infused inspiration.

In just a few short years they have had the opportunity to open for B.B. King, Los Lonely Boys, Fabulous Thunderbirds and other legendary bands. Also while on this journey they have played with Buddy Guy, Michael Burks, Sonny Rhodes, Pinetop Perkins, W.C. Clark and countless other blues legends. Peterson Brothers are currently in residency on Monday’s at the Historic Continental Club in Austin Texas.

Voted as the 2012 Best Band of Bastrop County, 2011Top 10 bands in the Austin Music Awards for the blues, soul and funk category and 1st Place in the 2011 Aspire to Be Me Talent showcase. The Peterson Brothers have gained the attention of the legendary Bootsy Collins who has become one of their mentors.

The band is currently in the studio working on their debut album with Michael Freeman, who produced the Grammy Award winning “Joined at the Hip” by Pinetop Perkins and Willie “Big Eyes” Smith.

Although much of their time is spent honing in on their musical gifts, they put precedence on volunteering and ensuring that their academics are a top priority. The Peterson Brothers are on a mission to help “Keep the Blues Alive”. http://www.facebook.com/petersonbrothersband?ref=hl

The show at Lustre Pearl on Saturday, March 16

12:00AM Diplomats of Solid Sound