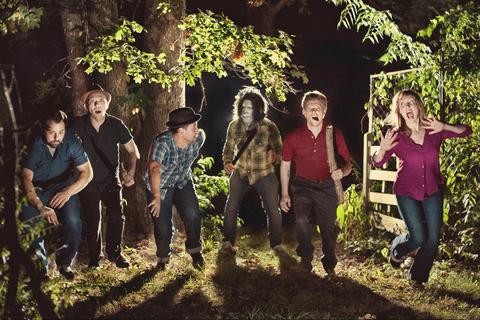 Listen to A Shoulder To Cry On

The phrase “Long Live All of Us” is the title of Glossary’s seventh full-length album, but it’s also meant as an all-inclusive homage to humanity. Frontman Joey Kneiser says, in light of all the bad things happening in the world, the band just wanted to make a positive record.

Long Live All of Us allowed the band from Murfreesboro, Tennessee, to take their influences farther than ever before, adding piano, haunting pedal steel, R&B-influenced horns and more to their own style of romanticized rock & roll. The songs are well-intentioned narratives that emphasize the great attributes of mankind — mercy, redemption, forgiveness and second chances.

Over a period of one month, the band transformed a house in rural Rockvale, Tennessee, into a recording studio and self-produced Long Live All of Us with friend and engineer Mikey Allred. The setting, joked Kneiser, would have fit perfectly into a Glossary song. The house was sandwiched between a church and a condemned meth lab, which was still wrapped in police tape.

Previous records — like 2010’s Feral Fire on Lucero’s Liberty & Lament label — were all recorded in 10 days or less, and were made to have a live feel. For the first time ever, the band had the luxury of time on its side.

“That’s the rock & roll dream…to live in a house and write and record together all day,” says Kneiser. “It allowed us a chance to experiment, and if you really wanted to do something you could take the time to make it happen. It was really one of the greatest creative experiences that I’ve ever had.”

The result is a hodgepodge of American music, similar to the Rolling Stones’ Exile on Main Street or the Clash’s London Calling — records that spanned many different musical genres. For example, Long Live All of Us switches from a Gospel-influenced song to a hopping, R&B-styled groove, and then to a crawling, country-tinged ballad and on to a soulful, up-tempo rock song. Jim Spake (Al Green, Alex Chilton, John Hiatt, Lucero … so many more) and Nahshon Benford, (Snowglobe, Lucero) both from Memphis, added horns on several tracks, including jaunty, Stax-like rhythmic horns on “A Shoulder to Cry On” and a lyrical baritone sax solo on “Under the Barking Moon.”

“The best thing that we have going as human beings is each other,” he says. – Jeremy Rush