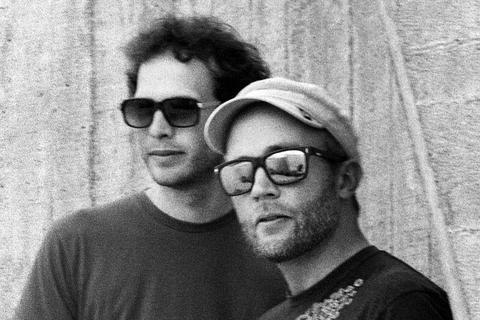 Listen to Won't F Us Over

ABX (pronounced like three consecutive letters) and STV SLV (pronounced “steve sleeve”) are collectively known as The Hood Internet. For the past five years, the duo have been chewing up the indie, pop, rap and R&B landscapes and spitting out pure fire. Like laptop-armed alchemists, they draw from their expansive interest in the many faces of modern music and re-imagine songs for mass public consumption through thehoodinternet.com.

Nearly 500 mixes and millions of free downloads later, The Hood Internet continue to ricochet across the globe like an Arkanoid ball, bringing their arsenal of reassembled tracks to crowded dancefloors. And the dance parties have definitely been ignited in every city they roll through, not to mention holding it down at Lollapalooza, Bonnaroo, SXSW, CMJ, Pitchfork's #Offline, Mad Decent Block Party, and Roots Picnic.

Having connected with so many musicians over the past few years, The Hood Internet are releasing their debut album of original productions, FEAT (pronounced like four consecutive letters) in October 2012. This release marks The Hood Internet’s first completely sample-free album with vocal and instrumental collaborations highlighting different artists including erudite rapping by Psalm One on the Tobacco-laced ’More Fun’, synth-pop chanteuse Class Actress alongside rapper (and Canadian poet laureate) Cadence Weapon on the chimerical ‘Critical Captions’ and the infectious track ’Won’t Fuck Us Over’ featuring the raw energy of Chicago group BBU.