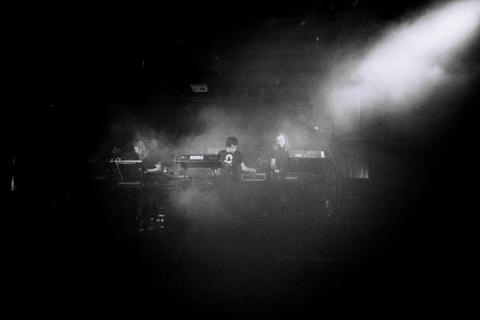 "Whoa. The Mannequin label is a relatively new one to me, but with Survive’s self-titled debut LP, they’ve set the mark pretty damn high. This album is full of synth-heavy soundtrack/horror sentiments, drifting from sounding futuristic at times to fully-immersed (via time machine) in the mid 80s. Survive hail from Austin, Texas, but it makes a lot of sense that this album was put out by an Italian label as it’s soaked in Euro flavor. From the atmospheric rotation of album opener, “Deserted Skies,” straight through to the celestial neon triumph of “Dirge,” the narrative here is laid on thick and with great affect. “Floating Cube” (which is such a great title) is a drum machine-laden flight through mountains of arpeggiated melodies. It’s simulataneously ethereal and colossal. Adding in airy, formless pieces like “Shunting Yard” and “To Light Alone I Bow” works well and gives the album more meat on its bones. The mix of the in-your-face bassline and swirling, heavily-effected vocals on “Hourglass” is intoxicating. Everything about the song is raw and cut on a diamond edge then fed through an endless array of chemically-altered transistors. This is what the future used to sound like, full of bombast and drama, but executed with such precision that it’s music that only machines could make. Survive are well and truly onto something with their debut album here. Incredible record." - Brad Rose, Experimedia