How to Stretch Your Recording Budget 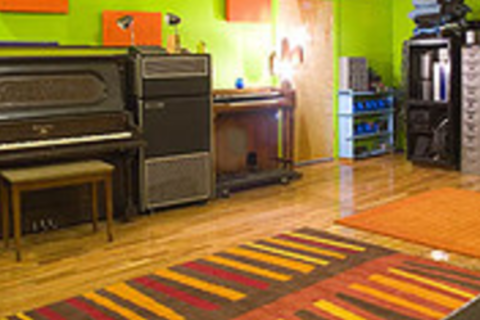 We're constantly being told that the music recording landscape is changing, and that every artist is more empowered than ever since they own a computer. But what does this really mean for the quality and cost of recording an album these days? Learn tips on how to save time and focus performances in pro studios, home studios and other spaces. Hear about modern recording budgets and how to get the best record made for the least amount of money.


Erik Wofford grew up in Austin, taking advantage of the vibrant music scene even before he could drive by going to local shows and playing in numerous bands. He was bit by the recording bug early on while recording his own band on a 4-track and helping out at Sixteen Deluxe's studio, The Bubble. While attending UT Austin for a B.S. in Geology, Erik spent much of his time as a DJ and engineer for KVRX Radio. While at KVRX, Erik started building microphones and started a company, Stapes Audio, with Brad Avenson.

After graduating in 2002, Erik started Cacophony Recorders, an open-environment, low-key yet world-class recording studio in East Austin on the banks of the Colorado River.

Erik has worked with such acclaimed artists as The Black Angels, Explosions In The Sky, My Morning Jacket, Voxtrot, The Octopus Project, Maserati, Bill Callahan and hundreds of others. In 2011, Erik mastered the Grammy-winning album by Grupo Fantasma, "El Existential."


Fun Dan-facts:
Dan Workman began his music career as a charter member of the seminal art/noise/rock band, Culturcide.  He leveraged his indie rock credentials and continued to work in the mainstream, engineering platinum and Grammy-awarding winning projects for some of Texas' most notable artists: ZZ Top, Clay Walker, Destiny's Child, Beyonce', Hubert Laws, and Arnett Cobb.  Dan currently lives in The Woodland Heights, Houston with his wife Christi, daughter Joe Ann, three cats, and a family of raccoons who have learned how to sneak in the cat door.  When not making music, or spending time with his family, he loves to ride very old motorcycles, very long distances.

The More Boring Dan-stuff:
Dan is President of SugarHill Studios, Houston, Texas: the oldest recording studio in the US, (71 years), and produces music for his company, Dan Workman Music. Dan is also producer and co-host of “Live From SugarHill”, co-founder of The Houston Sound, ZenHill Records, and ZenHill Music Publishing, Houston Texas. Dan served on the Board of Trustees of The Recording Academy (The Grammys) from 2008-2012, and is a member of the National Steering Committee of the Producer's and Engineer's Wing of the academy.