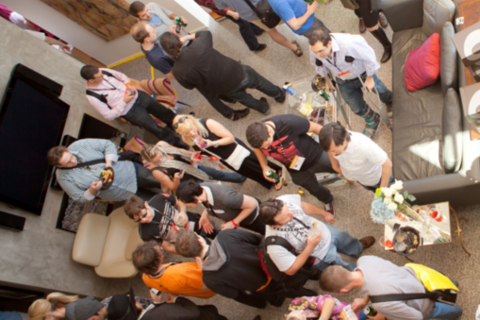 First ever multi-VC mentoring and fast pitch session as part of Startup Village. Venture capitalists focused on mobile, consumer web, software, commerce, enterprise, and big data will meet with entrepreneurs to discuss their ideas and give feedback. You can sign up for individual mentoring sessions with venture firms to get real time feedback on your idea and advice on how to take your startup to the next level. Apply to pitch or sign up for a mentor session at www.sxswvc.com

Over the last twenty years, Balaji has worked with leading media and entertainment companies leading their digital initiatives, has held global roles as a GM, SVP of Product and Consumer Experience at both private and public companies; and has previously worked at CTP, Scient, NCR, Delivery Agent, and Nike and was instrumental in helping launch Hotwire.com and Sephora.com among others.

He is a startup junkie, has been a founding member of several companies, is an angel investor, and guided the creation of Turner’s Media Camp to help media oriented startups accelerate what entertainment will look like in 20 years.

Balaji earned a Bachelor of Science degree in Life Sciences from Massachusetts Institute of Technology, and works/lives in both San Francisco, CA, and Atlanta, GA.


Ben Narasin serves as President, Seed Stage Investments and oversees seed funding investment activities at TriplePoint Ventures. Most recently, Mr. Narasin, an entrepreneur since the age of twelve, spent much of the early 2000s acquiring companies in the consumer Internet and e-commerce industries and providing liquidity to shareholders. Prior to his acquisition investment and consulting roles, he founded Fashionmall.com in 1993 which became one of the first e-commerce companies in the world and the first cost-per-click portal. He took Fashionmall.com through a successful public offering in 1999. Prior to that, Mr. Narasin founded and acted as CEO of a consumer products company. When not overseeing investment activities, Mr. Narasin manages to be a free lance food and wine writer, a lifelong passion. Mr. Narasin’s works have appeared in numerous publications including San Francisco Chronicle, Wine Enthusiast, Wine News, Health Magazine and various other consumer trade magazines. Mr. Narasin holds a B.A. in Entrepreneurial Studies from Babson College.


Jay Jamison, Partner, joined BlueRun Ventures in November 2010 and is based in Menlo Park. He focuses on early stage mobile, consumer and enterprise opportunities.

Jay is a popular speaker on topics of entrepreneurship and building businesses. He has been a featured speaker at the Startup Digest University, the Hacker Dojo, and the Founders Showcase. He is also a Mentor at the Founders Institute.

He received his MBA from the University of Pennsylvania’s Wharton School of Business and holds a BA from Duke University.