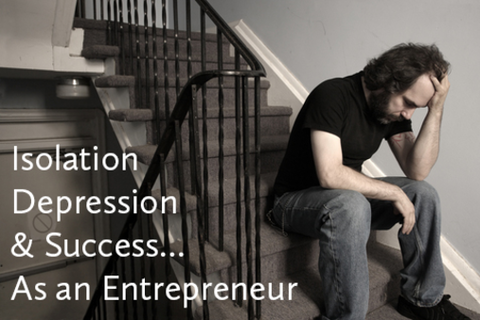 This will be a discussion and discovery of the methodology used by entrepreneurs in dealing with some of the challenges and emotions in a non-traditional work environment. As self employed individuals or entrepreneurs, often we work odd hours and in non-conventional environments. We don’t have a water cooler to converse with others, are often alone and sacrifice steady social circles because of the odd hours we keep.
The three things we will discuss and explore are isolation, depression, and accepting success.
We will discuss the pitfalls of isolation and explore as a group ways of overcoming the isolated feelings that come with our career. We would then talk about recognizing and overcoming depression, which could be a direct result of the isolation we must try to avoid as entrepreneurs. The final topic would be dealing with success as entrepreneurs. Our DNA doesn’t easily allow for idle time, and the anxiety and fear of things being too good can often be crippling.


I am just a passionate, energetic and generally optimistic person who enjoys everything about startup and tech culture. My first business was an illegal crap game on the Redlands Unified School District Bus route, but I have cleaned up my act since then. I am always interested in meeting cool people doing unique things. I have a background in Business Development and Marketing, and am one of many community organizers in the #VegasTech community.

I hope you will consider my core conversation at SXSW 2013, "Isolation Depression and Success as an Entrepreneur." It has been a tough stretch for the tech community, and it is one that has hit mine (#VegasTech) particularly hard with the passing of Jody Sherman from Ecomom. It is time our community starts to talk about the struggles of Entrepreneurism, and I hope you will join me in starting that conversation.