The Sweet Science Of Virality: You Are Bad At It 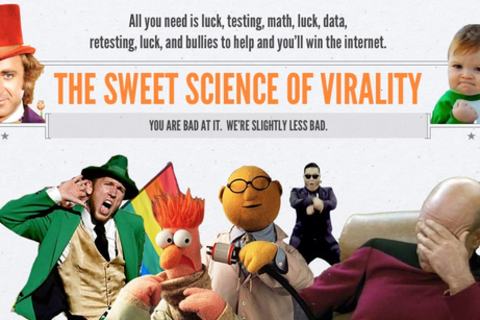 You are bad at Facebook. We are less bad at it than you. Also, the vast majority of your audience is probably on Facebook. (Unless you are Pinterest, but they are on Facebook too. Just sayin'.) You are probably not good at the sweet science of internet virality, that special concoction of optimization, finding or creating quality content, and then maximizing it's potential. We will teach you all our secrets to optimizing social media to drag traffic kicking and screaming back to your site.
Headlines, share images, vague descriptions, good content, and smart testing are a start. There is a science to virality. It's not as haphazard as you think.
So ALL ABOARD the interwebs science train!

Sara Critchfield is the Managing Editor at Upworthy.com, where she's having a ball. She's passionate about using technology, design, pop culture and even the old-fashioned art of a real-life conversation to spread meaningful ideas.

In previous iterations of life, Sara worked as the Community Manager at MoveOn.org, co-ran a small intellectual property consulting business, instituted food security programs in Guatemala, and did a lot of grassroots organizing in Washington DC.


Adam is a curator at Upworthy, where he gets paid to find stuff on the internet and then tell people he'll maybe make it go viral. Usually he doesn't, but occasionally he gets lucky and helps some non-profit get the attention they deserve.