Is There a West vs. East Journo Battle Brewing? 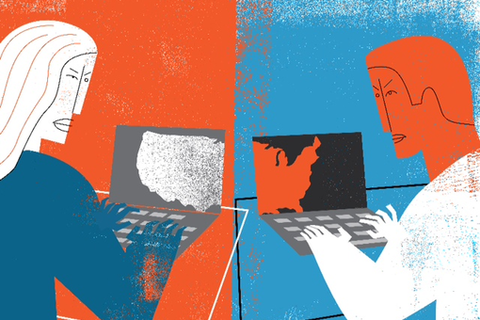 The unspoken consensus in media is that in order to “make it,” it’s necessary to spend some time in the East. Because, of course, the financial and governing epicenters are in New York and DC, the East has long been home to most of our renowned publications. But today geographical boundaries are being eclipsed by the digital era. The West Coast is rapidly building its own newsworthy infrastructure: it’s home to the technological forefront; the Pacific Rim is now responsible for half of the world’s consumers, trade, and global GDP; Los Angeles, San Francisco, Silicon Valley, Portland, and Seattle are becoming part of what’s now being referred to as the “Great Crescent.” Is there an emerging “Western” voice? Is there a need for one? Or, as the digital age continues to evolve and reshape society, will the fragmentation of the “epicenters” follow? Is the East Coast journalism power structure finally losing its grip as the place where “successful” journalists must get their start? Sponsored by the Knight Foundation.


Maria Streshinsky is the Editor in Chief of Pacific Standard, a bi-monthly magazine that puts the social sciences in conversation with the national debate. Maria was formerly the managing editor of The Atlantic, where she managed a staff of more than 25 editors, art directors, and interns; and edited a variety of stories. She developed The Atlantic’s Fiction-for-Kindle program with Amazon, working with such authors as Christopher Buckley, Joyce Carol Oates, and Paul Theroux. In 2009 she won the Atlantic Media Company 2009 Chairman’s Award, for editing excellence. Before The Atlantic, Maria spent two years at the U.S. Department of the Interior working on Indian affairs issues.


Scott Stossel is editor of The Atlantic magazine, where he has previously served as deputy editor, managing editor, and senior editor. He has also been executive editor and culture editor of The American Prospect. His articles and essays have been published in The Atlantic, The New Yorker, The New York Times, The Wall Street Journal, The Washington Post, The New Republic, The Daily Beast, and many other publications, and he is the author of the book Sarge: The Life & Times of Sargent Shriver. His new book, about anxiety, is scheduled to be published next year