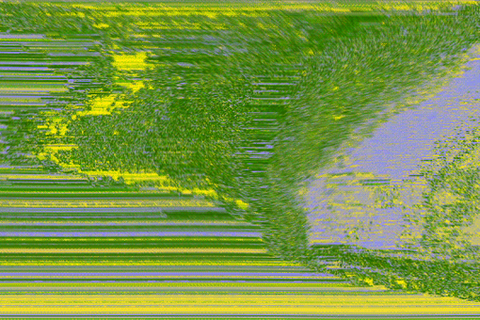 What happens when accidents become the building blocks of the art-making process?
Glitches point toward new ways of seeing the world, an echo or document of the technology, politics and humans that co-produce them. Both Phillip Stearns' "Year Of the Glitch" and James Bridle's "New Aesthetic" blogs yearn for a newer 'New Media', one made of the mediums themselves, just as Marshall McLuhan would have wanted.
In a technical sense a glitch is the unexpected result of a malfunction, but glitch art looks at the most beautiful of these. Much like serendipity, exquisite tech-surprises often tug at our deeper understandings, and throughout history they form the basis of creative innovation. Intentional glitch-makers celebrate the magelijk in the machine; they chart unexpected beauty amongst chaotic landscapes.
This collaborative presentation program highlights artists who create beautiful problems by corrupting data, hacking signals, manipulating the medium, challenging the display.

Alan Sondheim was born in Wilkes-Barre, Pennsylvania; he lives with his
partner, Azure Carter in Brooklyn NY. He holds a B.A. and M.A. from
Brown University in English. A new-media artist, writer, and theorist,
he has exhibited, performed and lectured widely.

Sondheim finished a successful residency at Eyebeam Art and Technology
Center in New York in March; while there, he performed with Foofwa
d'Imobilite and Monika Weiss; created a series of sound pieces based on
very low frequency radio and building vibrations; produced a number of
'dead or wounded' models of avatars usings 3d printing technology; and
worked on a series of texts dealing with issues of pain and its relation
to the virtual. He continues to work on texts and, recently, music/
soundwork with instruments such as the sarinda, sarangi, and oud.

Since January, 1994, Sondheim worked on the "Internet Text," a continuous
meditation on philosophy, psychology, language, body, and virtuality. The
Text is coordinated with multi-media work on various websites. In 1999,
Sondheim was the 2nd Virtual Writer in Residence for the Trace online
writing community (Nottingham-Trent University, England). In 2008,
Sondheim had a solo installation and nine-month residency at the Odyssey
exhibition space in the virtual world Second Life; he currently works in
the Odyssey sim. He recently completed a Second Life residency through
Humlab, University of Umea, in Sweden; this was accompanied by a gallery
installation at the university. He has performed for LowLives and the
Virtual Futures conference (both 2011). Sondheim has worked on augmented
reality pieces with Mark Skwarek; he continues to work with motion capture
files created at Columbia College, Chicago; and has been creating complex
performances in both OpenSim and Second Life.

In 2004,Sondheim had a five-week residency at the Center for Literary
Computing and the Virtual Environments Laboratory, under the directions of
Sandy Baldwin and Frances Van Scoy, both at West Virginia University; in
2007 he was a six-week resident of the same. In 2005 he was resident
artist/writer at Grand Central Art Center in Santa Ana. He produced two
cds at the latter (his older recordings have been reissued by ESP-Disk and
Fire Museum). Two new cds and a vinyl record have since appeared with
FireMuseum, a record with Qbico, and another cd with Myk Friedman for
Porter Records. Sondheim has played live in numerous venues around New
York and Philadelphia, both solo and with others. In 2008 he was on an
eight-month National Science Foundation (NSF) consultancy at WVU. His
research is in the art and aesthetics of codework, body and behavioral
modeling, virtual environments, and avatars in general. In 2007, Sondheim
was also the recipient of a New Media New York State Council of the Arts
grant.

In 2001, Sondheim assembled a special issue of the American Book Review on
Codework, which was seminal in its genre; along with Mez and Sandy
Baldwin, he co-edited an online issue of Leonardo. Codework was the
subject of a major workshop at WVU in April, 2008. In 1999-2000, Sondheim
was second virtual-artist-in-residence in the Trace online writing
program. Sondheim has taught at a number of schools, including UCLA, RISD,
NSCAD, Brown, and SVA. For the past 20 years, Sondheim has worked with the
Swiss dancer/ choreographer Foofwa d'Imobilite; their work has premiered
across Europe and the U.S. Sondheim's own laptop performances have been
widely seen; most recently he has been involved in online avatar
performance with Sandy Baldwin for live audiences in Paris, London, Basel,
Portland OR, Providence RI, and elsewhere. In January, 2010, Sondheim,
along with Foofwa d'Imobilite and Azure Carter, opened the season for
Dance New Amsterdam in Manhattan; in 2010, he performed as part of a
series at Mt. Tremper in upstate New York. Sondheim and d'Imobilite have
worked on a series of dance/performance DVDs, including Aletsch, and three
disks of performances in the Alps.

In 2006 Sondheim had a large exhibition at Track 16 Gallery in Los
Angeles. There have been other installations at the Grand Central Art
Center, West Virginia University, and Arena/Uqbar and OCAD, the last two
in Second Life.

Satrom runs a boutique digital studio in Chicago called studiothread and teaches how to do the wrong things the right ways in the Film Video New Media Animation Department at the School of the Art Institute of Chicago.

Collaboratively, Satrom performs with I ♥ PRESETS & poxparty and co-organizes the GLI.TC/H conference/festival/gathering. His time-based works have been enjoyed on screens of all sizes; his Prepared Desktop has been performed in many localizations; and his artwork and efforts have been featured in glowing-rectangles and dead-trees.


jonCates is the Chair of the Film, Video, New Media & Animation department at the School of the Art Institute of Chicago. His projects are presented internationally in exhibitions and events in cities such as Aix-en-Provence, Berlin, Beijing, Boston, Cairo, Chicago, Dallas, Houston, Linz, Los Angeles, Madrid, Mexico City, New York, Vienna and Warsaw as well as being widely available online. His research and writings appear online and in print publications from Gestalten, The Penn State University Press and Unsorted Books; and forthcoming publications from the MIT Press, Intellect Books and The Chicago University Press. In 2005 he created the concept of Dirty New Media, a culture of what is now often known as Glitch Art.