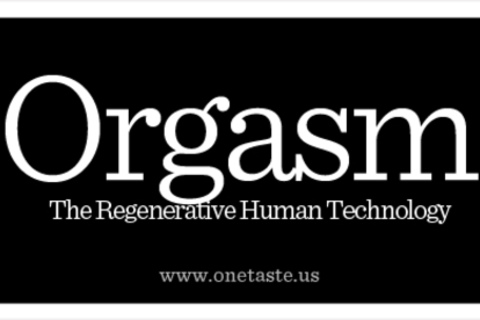 Female orgasm is vital for every woman and man on the planet. In a world where technology and social networks have increasingly replaced in-person interaction, female orgasm nourishes our fundamental need for visceral, human to human connection.
What the internet did for computers, female orgasm can do for human connection.
Through a fifteen minute practice, men and women access the universal socket for connection. It's deliberate and structured with repeatable results. It increases vitality and energy . It's profound, yet simple and must be experienced.
Female orgasm is a renewable, sustainable, regenerative resource creating a more complex, attentive, and connected world.


Nicole Daedone is a sought-after speaker, teacher, and author who has spent her groundbreaking career redefining orgasm from a woman’s point of view. Starting with her fundamental belief that a woman’s sex is her power, she treats supposedly taboo subjects with unparalleled humor, intelligence, and insight.

Nicole is the author of Slow Sex: The Art and Craft of the Female Orgasm (Grand Central/Hachette, May 2011) and is the founder of OneTaste, a company that offers training in female orgasm and Orgasmic Meditation through online media and in-person coaching and courses. The practice at the heart of her work is called OM or Orgasmic Meditation. OM uniquely combines the tradition of extended orgasm with Nicole’s own interest in Zen Buddhism, mystical Judaism and semantics. Helping to foster a new conversation about orgasm—one that’s relevant and real—she has inspired thousands of students to make OM a part of their everyday lives.

Nicole graduated from San Francisco State University with a degree in semantics and gender communication. She went on to found the popular avant-garde art gallery 111 Minna Gallery in SoMa before moving on to OneTaste. Nicole has appeared on ABC's Nightline and her OneTaste couple’s retreat was recently filmed as part of an upcoming series on women’s sexuality for CNN. Her work has been featured in the New York Times, the New York Post, the San Francisco Chronicle, and 7x7 Magazine, among others, and her writing has appeared in Tricycle magazine. She is also a featured speaker at the 2011 TEDxSF conference. In his #1 New York Times Bestseller The 4-Hour Body Timothy Ferriss calls the OM practice “required education for every man on the planet.” Raised in Los Gatos, CA, Nicole now lives in San Francisco.