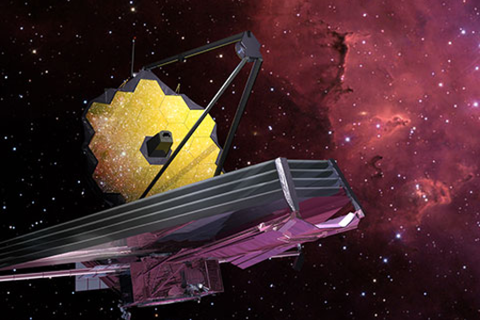 NASA’s James Webb Space Telescope will be the most ambitious telescope ever constructed. Hubble’s tennis court-sized successor will be 100 times more powerful and orbit far beyond Earth’s Moon, where it will beam back images of the universe’s first galaxies as well as celestial objects hidden by clouds of cosmic dust. View the full-sized Webb telescope model outdoors, then get an in-depth look at the perplexing questions the telescope is designed to answer: How did the universe form? Is our solar system unique? Are we alone in the cosmos? Our panel discussion will include five-time NASA astronaut John Grunsfeld, who visited Hubble on three missions; as well as experts in astrophysics, Microsoft’s Worldwide Telescope project, and Webb prime contractor Northrop Grumman. Learn about the vision behind Webb and the challenges of its construction in this immersive experience that showcases the science, images and technologies changing our understanding of our place in the universe.

In his current role Dr. Conti serves as the senior technical advisor on all innovation and core technology initiatives for the James Webb Space Telescope (JWST). His main focus is to foster an atmosphere favorable to innovation in which to develop ideas to improve the success of the JWST mission. He is responsible for the implementation of proof-of-concept ideas aimed at maximizing scientific return from JWST and the project visibility within the science community and the public.

Dr. Conti has been an early proponent of the use of modern data mining and visualization techniques across the astronomical community. Many will recognize him as the co-creator of the GoogleSky concept and a team member of Microsoft's World Wide Telescope.


Blake Bullock is the James Webb Space Telescope Campaign Lead for Northrop Grumman Aerospace Systems in Redondo Beach, CA. In this role, she is responsible for supporting scientific and technical advocacy for astronomy and astrophysics. Prior to her current assignment, Ms. Bullock served as Risk Manager and Systems Engineer for the James Webb Space Telescope Program at Northrop Grumman Aerospace Systems.
Ms. Bullock served as a Presidential Management Fellow at the National Aeronautics and Space Administration (NASA) and in the Pentagon for the Office of the Secretary of Defense, Strategic and Space Programs. Prior to this, she lived and worked in New Mexico as a science journalist and Mass Media Fellow of the American Association for the Advancement of Science. She holds a Master’s degree in Astronomy from Wesleyan University and a Bachelor’s degree in Astrophysics from the University of California, Berkeley. She is a member of Women in Aerospace, the Association for Women in Science, and the American Astronomical Society.
Northrop Grumman Corporation is a leading global security company providing innovative systems, products and solutions in aerospace, electronics, information systems, and technical services to government and commercial customers worldwide.


Jonathan Fay is the Principal Software Architect on the Microsoft Research WorldWide Telescope project. He is a 20 year Microsoft veteran and also an enthusiastic amateur astronomer who designed and constructed his own automated domed observatory.