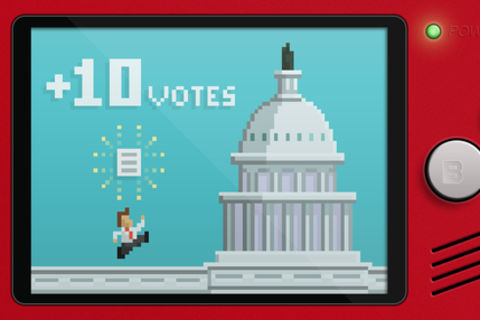 Peter Sagal of NPR’s "Wait Wait... Don’t Tell Me!" and host of new PBS series, Constitution USA, leads a “Wait Wait” style conversation on reinvigorating dreaded civics lessons through gaming. More Americans can name the Three Stooges than the three branches of government. Fewer than half can name a single Supreme Court justice. Clearly, there’s a gap in civics education. How to breathe life into a subject that most of the digital generation find dry and abstract? Sagal talks to panelists Gene Koo of iCivics and to game developer Dan Norton of Filament about how games can be used to convey civics in action, requiring players to engage in complex decisions around government and showing the effects of different choices. How does a game developer turn the three branches of government or the Bill of Rights into a game that kids will actually want to play and learn from? Can values and ethics be part of game design? And does any of this lead to more participation in democracy?

Gene Koo leads iCivics to educate and engage a new generation of American citizens. As Executive Director, he focuses on aligning operations and strategy with organizational vision, achieving large-scale adoption, and securing long-term sustainability. Prior to iCivics, Gene developed new media strategies to connect nonprofit organizations with their grassroots constituencies; his work with the U.S. Holocaust Memorial Museum won two 2012 Webbys. As a Fellow at Harvard’s Berkman Center for Internet & Society he brought Web-based innovation into law school classrooms and designed virtual worlds for civic engagement. Gene also co-founded the nation’s first online skills training program for legal aid attorneys. He holds a J.D. and a B.A. from Harvard.


Dan Norton is a founding partner and CCO at Filament Games. He specializes in crafting educational game design documents and storyboards that originate from learning objectives. He is proud to have designed games about a uniquely broad range of topics, ranging from marine turtle ecology to legal argumentation. Dan sees Filament as an opportunity to merge his life long love of games with his incessant quest to learn about new and interesting things. He is a founding member of the GLS organization at UW Madison. Aside from games and game design, he enjoys bicycling, baking, killing dragons with his wife and spending time with his incredibly stupid cats.


Since 1998. Peter Sagal has been the host of the Peabody Award-winning "Wait, Wait… Don't Tell Me” from NPR, which each week is broadcast via 627 public radio stations to 3.5 million listeners and additional million people via podcast. This spring, he will appear on PBS as the host of "Constitution USA with Peter Sagal" a four hour documentary series about the Constitution and how it's being lived, and argued, today.

He is the author of the The Book of Vice: Very Naughty Things and How to Do Them, a regular columnist for Runner’s World, and is working on a new book about long distance running for Simon and Schuster. Seriously, he can go on and on about running, don’t even bring up the subject.