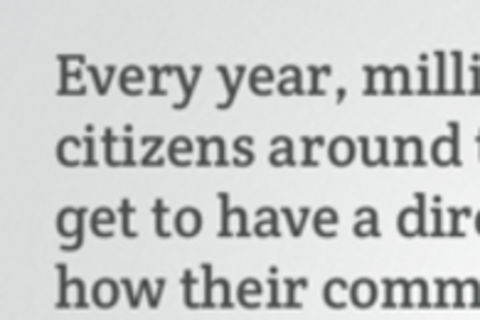 Every year, millions of citizens around the world are involved in a crowdsourcing effort in which they tell their governments where public money should be spent. Known as Participatory Budgeting (PB), this practice is more than a mere public consultation on the budget: citizens actually decide on the budget allocation. Dubbed by the New York Times as “revolutionary civics in action”, and currently taking place in 1,500 cities around the world, participatory budgeting is starting to spread in the US following its recent adoption in Chicago and New York City. In many cases, technology has been a key part of this civic revolution: from open data to social media and mobile apps, technology is dramatically increasing citizens' engagement in public budgets.


I'm the founder and CEO of Intellitics, a digital engagement startup based in San José, CA. We help clients in the public, private and non-profit sector as they embrace digital technology to engage their stakeholders, constituents and communities in high-quality dialogue and other participatory processes.