Spread the Happy, Save the World 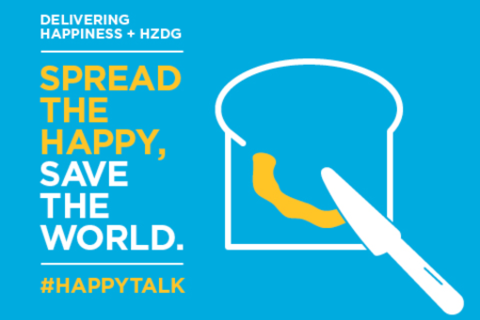 The sad part about happiness: it doesn’t always come easy. In fact it’s often quite a challenge. We want to fix that. Delivering Happiness is a company dedicated to finding what makes you happy—and they aren’t messing around. Their movement to “nudge the world to a happier place” spans across the globe, reaching individuals, organizations, and businesses, guiding them toward profits, passion, and purpose. HZDG (HZ) had the opportunity to take part in trial sessions for the company’s movement, Delivering Happiness at Work. With guidance and inspiration from happiness experts, it’s possible to achieve a high level of employee morale and sustain a happier, healthier environment. Learn why satisfaction in the workplace yields high levels of efficiency and significant feelings of fulfillment. Understand why this matters. Use it to empower your community and create meaningful life experiences. Join the movement. Spread the word. Because life’s too short to be anything but happy.


James Key Lim is the CEO of Delivering Happiness at Work and his purpose is to “make happy work.” In 2002, James became one of the first employees at Zappos.com to develop new strategic revenue streams with CEO Tony Hsieh. In that role, James successfully took ideas to market to create multiple record breaking new brands and generate over $60M in revenue in just 2 years.

Throughout the years, James has held positions in strategy and operations at multinational corporations and startups including Andersen’s Technology consulting division, Jawbone.com, and Ask.com.

As an avid entrepreneur, he is also the founder of an award winning Japanese spirit company called Haamonii (harmony). His purpose is to help organizations use happiness as a business model towards improved productivity, service, retention, and profits.


Jenn Lim is the CEO and Chief Happiness Officer of Delivering Happiness, a company she and Tony Hsieh (CEO of Zappos.com) co-founded to inspire science-based happiness, passion and purpose at work, home and everyday life.

Jenn has been a consultant at Zappos from its start-up days in 2003 to the $2B business it is today. Since 2009, Zappos has been on Fortune’s “100 Best Companies to Work For” list and has been bought by Amazon.com in a deal valued at $1.2 billion on the day of closing. One of her creations, the Zappos Culture Book, has become a global symbol of how companies can use happiness as a business model to increase productivity and profitability.

In 2010, Jenn led the launch and management of Tony’s first book (Delivering Happiness) which has sold over 460,000 copies worldwide and hit #1 on bestsellers lists like the New York Times and USA Today. It was voted one of the best business books by NPR, Inc. Magazine and the Wall Street Journal, remained on the New York Times list for 27 weeks and is now being translated into its 20th language.


As President and Executive Creative Director, Karen Zuckerman leads both the creative and the corporate vision of HZDG (HZ), the agency she launched from her basement in 1987. More than 25 years later, she stays true to her mantra—just make it cool—and has grown HZ into a fully integrated, highly energized creative agency of more than 100 employees, with offices in DC and New York.

Karen’s non-traditional approach and guidance haven’t gone unnoticed. She is one of Graphic Design magazine’s “25 People to Watch” and was recently nominated for a Cooper-Hewitt award. Named one of Bethesda magazine’s “Coolest Companies,” HZ attracts the brightest, most talented professionals. Its no wonder the Washington Business Journal named HZ the “#1 Graphic Design and Interactive Firm” four years in a row.

HZ’s work has been featured in leading industry publications like Communication Arts, Graphis, HOW, and Print. In addition, the agency has received awards from the American Advertising Federation (ADDY® Awards), AIGA, the Art Directors Club, and the Direct Marketing Association of Washington, to name a few.

In 2009, Karen and her daughter launched Dormify, an online content and commerce brand that arms college students with the tools to create a living space that is uniquely their own. Although Dormify.com was only launched in beta in 2011, it has already been featured in The New York Times, The Washington Post, USA Today, Seventeen, and Teen Vogue, as well as on Fox & Friends and Today.

Karen is deeply involved with both HZ and Dormify. If she isn’t working (which is rare), she enjoys vacationing with her husband and three children. Karen is a Philadelphia native and a graduate of Penn State with a B.A. in Graphic Design.


As "Resident Nerd," Kevin is the go-to resource for innovative and creative technology solutions. An entrepreneur at heart, you can find Kevin working late nights in an effort to perfect the latest of HZDG's offerings. A purist who can be found quoting "The Zen of Python" to anyone who will listen, he keeps our software fresh and cool!

Since hooking up with HZ, Kevin has worked on high-profile projects for Volkswagen, Waldorf Astoria, IMAX, Brooks Brothers, Rockefeller Center, Ryan Homes, and the Washington Redskins.

A Computer Science major who has been an active member of the open source community from a young age, Kevin has worked with almost every major development platform in some capacity or another and is always looking for the next one!