The Perks of Procrastination: Creating Connections 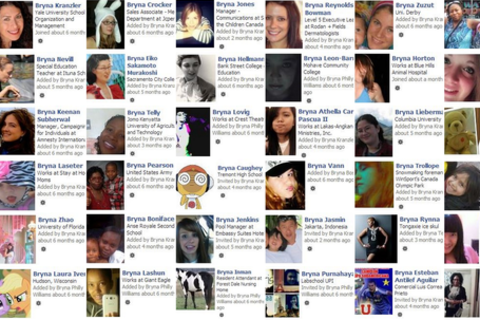 Writers are notorious procrastinators, but as you can imagine, we're also creative at finding ways of delaying sitting down in front of a blank or partially completed page. One of my recent dilatory tactics turned into something more. I began wondering whether there were others out there who shared my unusual name. I had met one other Bryna when I was growing up, and had heard of two others – the grandmother of a high school classmate, and Kirk Douglas’ mother, after whom he named his production company. But once I started looking, I discovered Brynas all around of the world, each of whom had never met another Bryna, and were excited to chat with others with the same, shared given name. On the basis of this simple connection, over 140 Brynas have joined a group to get to know each other and share our interests and desires. If it's that simple to forge a connection with strangers, does it mean that we are all missing something? What is it that we are all seeking?


Bryna Kranzler is a graduate of Barnard College where she studied playwriting, and received the Helen Prince Memorial Prize for Dramatic Composition. Her first play was a finalist for the Eugene O'Neill Memorial Theater Competition, and was scheduled for production twice: the first time, the theater owner died, and the season was shut down; the second time, the director committed suicide. For the benefit of the arts community, she got out of playwriting and earned an MBA from Yale University to make up for her misspent youth. She spent 15 years in marketing for health-care, high tech and consumer products companies before returning to writing.

Her first book, The Accidental Anarchist, is the winner of multiple awards, including the 2012 Readers Favorite Award for Historical/Cultural Non-Fiction, the 2012 International Book Award, and National Indie Excellence Award for a Historical Biography, and the 2011 “USA Best Books” Award.