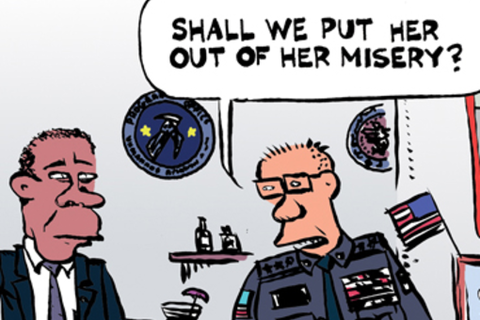 Political cartooning has been around since ancient Rome and is more popular with readers than ever before. Now that print media is being replaced with online distribution channels, however, they're being left behind—and content-based websites are missing the chance to exploit this powerful mix of words and pictures. Cartoonist, author, ex-newspaper syndicate executive and occasional comix war correspondent Ted Rall explains how cartoons—not just political cartoons—can bring more eyeballs to your website and can be directly monetized.


Ted Rall is a political cartoonist for The Los Angeles Times, a nationally syndicated opinion columnist and occasional war correspondent. Twice the winner of the RFK Journalism Award and a Pulitzer finalist, Rall is the author of 16 books, including "The Anti-American Manifesto" and "The Book of Obama: How We Went From Hope and Change to the Age of Revolt."

Rall is also an award-winning graphic novelist best known for "My War With Brian" and "To Afghanistan and Back," the first book about the US war against Afghanistan.