Never Give Up, Never Surrender: Tips from the Pros 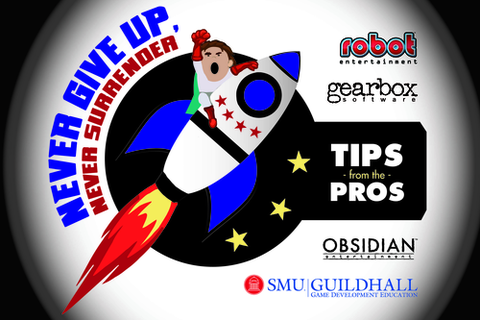 Representatives from some of the hottest independent game companies share the secrets of their success. Get an inside glimpse of starting small to making it big. Learn how they manage the pressure to "sell out," and what you can do to carve your own path in the competitive world of electronic games. Moderated by The Guildhall at SMU.


Making insanity the fun thing to do for two decades.


Creative Director and co-owner of Obsidian Entertainment, Chris started his escape from reality by freelancing for a number of pen and paper role-playing game companies in high school before Interplay foolishly hired him as a game designer in 1996. He worked on most if not all of Black Isle’s internally developed projects, including Planescape: Torment (Lead Designer), Fallout 2, the whole Icewind Dale series, and Baldur’s Gate: Dark Alliance, and a number of canceled titles that still make him weep, including Baldur’s Gate 3 and Fallout 3. Chris was the Lead Designer on Star Wars Knights of the Old Republic II: The Sith Lords, moved on to a Senior Design role on Neverwinter Nights 2 and Mask of the Betrayer, worked briefly as the Creative Lead of the Aliens RPG, and then went on to be lead designer on Alpha Protocol, Obsidian's espionage RPG. He worked on Fallout: New Vegas as a Senior Designer, and went on to be Project Director of most of the Fallout New Vegas DLCs (Dead Money, Old World Blues, and Lonesome Road). He just finished working on Wasteland 2 and is now working on Obsidian’s Kickstarter: Project: Eternity. He is reported to be non-toxic, and occasionally friendly to others.


Gary Keith Brubaker was appointed Director of The Guildhall at Southern Methodist University in June 2012. Brubaker has extensive experience in the games industry, having served as a development director, a manager of core technology, and lead programmer.
He remembers playing one of the first (if not THE first) Pong machines in San Jose, California. But, he wanted more and quickly convinced one of his friends at Cal Tech to "loan" him time on the mainframes to play other early games. His first individual game project was on the Apple II, a Lunar Lander clone in the early 1980s.
Brubaker turned his passion for games into a career in 1992 when he joined LucasArts Entertainment. While there he worked on Rebel Assault, Shadows of the Empire, The Curse of Monkey Island, The Dig, and Indiana Jones and the Infernal Machine.
He later joined Stormfront Studios, where he worked on the Electronic Arts’ title Lord of the Rings: Two Towers. He also contributed to a number of other titles including Lego MyStyle. Gary moved to Dallas to join Atari/Paradigm as Manager of Core Technology. He led a group that created the engine for a number of Atari games including: Terminator 3: The Redemption, Mission Impossible: Operation Surma, Dungeon & Dragons Heroes and Backyard Baseball. Brubaker joined SMU in 2004, and has taught game studies, programming, and supervised master’s degree students in the programming specialization.
Brubaker received a B.A. in Physics from the University of California, Berkeley and an M.B.A. from Southern Methodist University.


Harter Ryan, is co-founder and current Chief Operating Officer at Robot Entertainment, located in Plano, Texas. The four year old, 50 person game studio is responsible for developing the award-winning franchises Orcs Must Die! on PC/Steam and Hero Academy on iOS. Previously, he served as a Lead Producer & Executive Producer at Ensemble Studios in Dallas responsible for the Age of Empires II and Age of Mythology PC games. Subsequent to the acquisition of Ensemble Studios by Microsoft in 2001, he served as Group Program Manager for Age of Empires 3 along with overseeing the development of Halo Wars for the Xbox 360.