Disaster: The Future of Crisis Communications 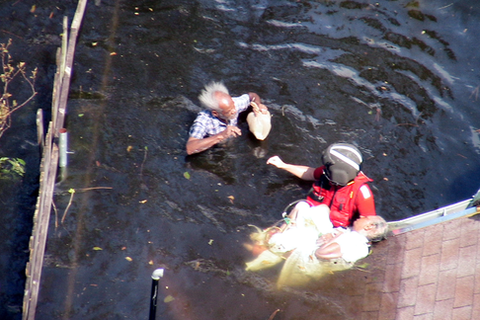 An interactive discussion with attendees about how a disaster response works from a communication responder's standpoint. Panelists will share with attendees how to communicate effectively with Joint Information Centers, and how to get the most out of their interactions with responders. Explaining how crisis communications work, panelists will also show how the face of disaster response is changing in the face of social media and emerging technologies. This panel is for media professionals as well as bloggers and the general public.


LT Anastacia Visneski is a Public Affairs Officer in the United States Coast Guard. She received her commission in 2004, serving her first tour aboard the CGC Jarvis. Visneski has served as a Public Information Officer capacity for Hurricane Katrina, Hurricane Rita, Hurricane Gustav, Hurricane Ike, and numerous other cases including Deepwater Horizon in 2010. She has designed and provided joint information center and crisis communications training to numerous state and federal agencies, as well as to the public.

Visneski was the first official blogger of the U.S. Coast Guard, designing, building and launching the CG Compass. She also was one of a small team that built the Coast Guard's social media program. Currently she is stationed in Seattle, as a graduate student in the Master of Communication Digital Media program at the University of Washington.


Brandon Brewer is an independent communications consultant and retired military public information officer. During his 22-year career in the U.S. Coast Guard, he specialized in environmental risk communication, emergency response operations and information dissemination. He has deployed worldwide to natural and man-made disasters to communicate health and safety information to the public via media relations, visual imagery and the written word. Brewer led two joint-agency teams of federal communicators to re-write "Joint Information Model: Collaborative Communications During Emergency Response" for the U.S. National Response Team. He studied journalism and communications at the Defense Information School and Old Dominion University. He lives in Norfolk, Va.


Hanson Hosein is President of HRH Media Group, and serves as the Director of the Communication Leadership graduate program at the University of Washington in Seattle. He’s also the Telly Award-winning host of Four Peaks on UWTV and Northwest Cable News that features interviews with the region's influential network of visionaries and leaders. The TV show is just one element of a creative leadership network that Hanson founded, which is intended to drive innovation and entrepreneurship in the Pacific Northwest through education, roundtables and events. He specializes in storytelling, social media strategies and business models of communication advising organizations such as Weber Shandwick, Tableau Software and the Pacific Science Center. Hanson’s book Storyteller Uprising: Trust and Persuasion in the Digital Age explores how individuals and organizations can tell their own multimedia stories and create their own channels of distribution — thereby serving as trusted sources in their own right. His pioneering work earned him Seattle Magazine's "Most Influential" in fall 2010, particularly due to his role in hosting TEDx Seattle. Hanson directed the award-winning documentary films Rising from Ruins and Independent America: The Two-Lane Search for Mom & Pop, which have been broadcast around the world and prominently featured online, including on Hulu and Yahoo!'s homepages, as well as on Netflix and iTunes. He's a former NBC News war correspondent, backpack journalist and investigative producer -- and is a recipient of Overseas Press Club and Emmy Awards.


Captain John Visneski is a Cyberspace Control Officer in the United States Air Force. He received his commission in 2008. While assigned to the 5th Combat Communications Group, Captain Visneski helped engineer worldwide command and control solutions for humanitarian relief efforts such as Hurricane Ike/Gustav and the Haitian Earthquake, as well as contingency operations such as Operations IRAQI FREEDOM and ENDURING FREEDOM. In his current assignment, Captain Visneski has directed operations for worldwide network infrastructure installation.

Captain Visneski has deployed to both Iraq and Afghanistan where he has directed joint tactical communication networks. Most recently he served as the Director of Joint Communications for NATO Rule of Law Field Support Mission - Afghanistan.