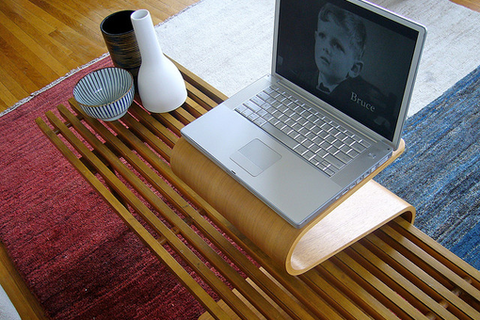 The first wave of web was text. Remember Julie Powell's famous food blog -- and how it had no pictures? Along came a more visual web soon after, and now, anyone can be a visual curator with the help of Pinterest. But the next wave is video, and now that our TV's are connecting to the Internet, television studios are devoting more resources than ever to creating killer web TV. The lines between traditional TV and web TV are slowly blurring, creating an opportunity for would-be content creators to get in on the game.
We'll talk with the VP of HGTV.com, one of Bravo's web TV filmmakers, and two web TV hosts to tell you what the forecast looks like for web video. We'll also address practical concerns, like: How do you amass a crew? How do you package your web video series? Should you pitch it to a media company, or go grassroots and promote it yourself? We'll discuss both success stories and flops, arming you with information you need to embark on your own web video project.


Camille Styles is the founder and creative director of popular lifestyle blog camillestyles.com, where she shares the creative entertaining ideas that inspire her parties and her life. Camille is also a regular lifestyle contributor to media outlets like HGTV, Cooking Channel and DIY Network, and does styling work for national fashion and lifestyle brands. Her modern aesthetic and eye for detail come together to create parties that are simply chic and all about fun.


Christian Remde is an award-winning director, editor and motion graphics artist with over 15 years of film and television experience.

Christian began his career in the Bay Area working on high-end corporate and commercial productions and, in 1999, moved to New York City where he transitioned into music video and national commercial spots. In 2002, he moved to Los Angeles and worked in Technicolor’s Creative Services division creating DVD menus and interactive games for Hollywood blockbusters like Kill Bill, The Lion King, Who Framed Roger Rabbit? and Finding Nemo.

In 2005, Christian moved back to New York City and moved further into writing, producing and directing. His first short film, The Wine Bar, was released in 2006 and played at over 50 film festivals, winning 10 awards, including the Filmmaker Award and Audience Award at the 2007 DC Short Film Festival. Since then, Christian has directed for companies like Verizon, Blackberry, MetLife, Citigroup, Bread&Butter PR, and expanded his writing and directing portfolio through other short film projects.

Christian's work has been seen worldwide on The Huffington Post (where he is also a blogger), Bravo TV's website, Food & Wine Magazine's blog, New York Magazine's Grub Street site and many other outlets. He lives in Austin, Texas with his wife Julie and their two ornery cats.


Jillian St. Charles has worked at some of the biggest media brands in the business – CNN, Aol, Redbook Magazine and now HGTV. She has seen it all. In her current position as VP, digital at HGTV she oversees both the art and the business of creating a lifestyle website that gets 5-6 million unique visitors a month.


Tolly Moseley is a freelance writer and the founder of the popular blog, austineavesdropper.com. Last fall, Tolly was the co-host of "Hungry In" on The Hungry Channel, a co-production between YouTube and Electus Studios, where she ate her way through culinarily interesting neighborhoods. Her work focuses on arts, culture, and life, and has appeared on NPR Austin, Salon.com, the Austin American-Statesman, Texas Parks & Wildlife Magazine, and more.