Training the Next 7 Generations of Storytellers 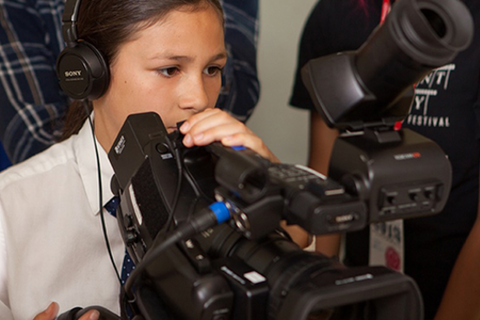 The storytelling tradition is strong within Native cultures, however, traditions and languages are still being lost with every generation. Over half of the Native American population is under the age of 25 and almost 80% live in urban areas away from Reservations. One of the ways to make sure these cultures continue is to empower the next generation of Native storytellers to tell their stories in ways that engage their peers as well as mainstream society. This panel of accomplished Native American media makers and educators will share their experience with training Native youth in digital storytelling. Learn lessons for engaging and teaching youth in your communities. Learn what it takes to be a good storyteller in the 21st century.


Eric Martin, Interactive Media Specialist, has been working at Vision Maker Media (formerly Native American Public Telecommunications) since 1996. He helped create the organizations online presence working on live webcasts, podcasts, websites and social media. Eric's current responsibilities have him focusing on the opportunities that New Media presents in being able to tell stories that won't necessarily work within traditional broadcast media. Eric received his Bachelor in Journalism with Distinction from the University of Nebraska-Lincoln in 1997.


Missy Whiteman, Indigenous director, producer, writer and digital media consultant, for Independent Indigenous Film & Media.
Missy belongs to the Arapaho and Kickapoo nations and lives in Minneapolis, Minnesota.
At a young age, Missy had the unique opportunity to be exposed to many different arts and cultures that later influenced her own creative process. She received mentoring and support from various artist, writers, filmmakers and arts organizations in the Twin Cities. Her main influence has been her father, who passed down the belief of creative process as a vision and spirit driven gift.
The foundation of her education is in the arts in the forms of visual arts, media arts, theatre, film & video and photography. As a teenager, Missy attended the Rudy Perpich Center for Arts Education and then later attended The Minneapolis College of Art and Design for Filmmaking and Photography,
Missy understands her work to be a voice for her ancestors to educate and foster better understanding among all people as well as promote healing and vitality amid her own community. While based in part on traditional ways and ideas, her movies also address themes of loss in relation to larger cultural forces as well as the process of healing and redefining cultural identity.


Tracy Rector (Seminole/Choctaw) is the Executive Director and Co-founder of Longhouse Media. After having worked with over 2100 youth in just eight years, Longhouse Media has seen the artistic and community growth of many young Native filmmakers. As an educator and co-founder Tracy has worked from the ground level in organizing this success in tandem with her passion for filmmaking. With her first feature projects, Tracy learned how to bring oral tradition into a contemporary storytelling format while also identifying how the Coast Salish communities wanted to be involved in the filmmaking process. Her films have had national broadcast and distribution with Independent Lens, National PBS, National Geographic's All Roads Project and on the world festival circuit. In 2009 Tracy received the National Association for Media Literacy award for outstanding contributions made in the field of media education (previously awarded to Jon Stewart and Bill Moyers). She is a Sundance Institute Lab Fellow and is the recipient of the Horace Mann Award for her work in utilizing media for social justice. Tracy was raised in Seattle and Albuquerque, both homes have inspired her artistic and cultural vision. She currently works and lives in Seattle with her two boys.