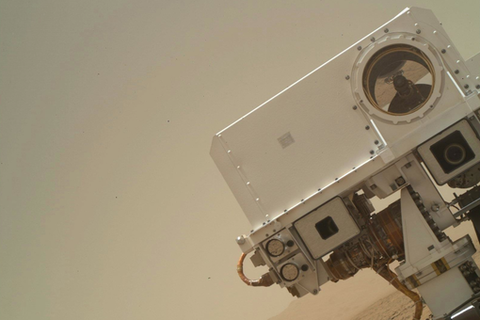 A tweet that will live in infamy, "GALE CRATER, I AM IN YOU" heralded a new era of space exploration and conversation between NASA and the general public. As the Curiosity Mars rover touched down on the Red Planet, the teams at NASA and the Jet Propulsion Laboratory were sharing the historic event on Twitter, Facebook, Ustream, YouTube, Google+, Xbox Live, mobile apps and in-real-life landing parties. The Mars Science Laboratory mission propelled the interest and attention of the nation back onto the space program — all while competing against the London Olympics and the presidential campaign. And what the public saw was a hipper, more accessible NASA — one that generated an avalanche of memes from Unimpressed Curiosity to Mohawk Guy. What went on behind the scenes with this campaign that helped NASA capture the public's attention, and can NASA and JPL keep the interest and excitement going?


A space enthusiast from an early age, Ellison spent 8 years as a multimedia producer for a medical training company before gaining the attention of NASA's Jet Propulsion Laboratory where he has been a Visualization Producer since 2010.

John is an award-winning director & director of photography whose extensive documentary footage over the last 17 years of building, testing, landing and operating rovers on Mars, has been seen on programs such as: National Geographic’s “Martian Mega Rover”, NOVA’s “Ultimate Mars Challenge”, two IMAX movies, “Roving Mars” and James Cameron’s “Aliens of the Deep”, and countless other Discovery Channel, PBS-NOVA, National Geographic, and Science Channel programs.

His most famous work has been the creation of the viral video “Seven Minutes of Terror” for NASA’s Mars Science Laboratory’s “Curiosity” which captures the intensity of what engineers had to design in order to land a car sized rover safely on the Martian surface.

John received an EMMY award for his work on National Geographic’s “Five Years on Mars”. John has also received NASA’s “Videographer of the Year” award three times over the last 8 years and a Gold Plaque Award at the 1999 Chicago Film Festival for his documentary of NASA’s Mars Pathfinder Mission.

He is also an accomplished musician, scoring most of his NASA productions, including “Seven Minutes of Terror.”

In addition to working at NASA, John is also currently writing, directing and starring in the web series, Tyranny. The series, still in it’s first season, has already received several nominations in multiple festivals for: best looking show, best web drama, best thriller, best soundtrack, best sound design, and just recently received a nomination for best male actor in a web series. Tyranny was one of 20 web series chosen for competition in the Geneva International Film Festival in 2010.


Stephanie L. Smith isn't a robot, but she plays one online. As a social media specialist at the NASA Jet Propulsion Laboratory, she's one-third of the JPL social media team, which holds conversations with the public and the media about the lab's 20+ flying space missions via Twitter, Facebook, YouTube, Ustream and Google+.

When not tweeting on behalf of @MarsCuriosity or co-hosting NASASocial (nee NASATweetup) events, you'll find her on the trail or high-ropes course as an Assistant Scoutmaster with Boy Scouts of America. A veteran of the "Let's Go" travel guides, Idealab and Webby- and Peabody-award winning "Channel One News," Stephanie is always game for the adventures that make great stories.


Veronica McGregor tweets to millions of people each day while channeling her inner robot. She manages news and social media operations at NASA’s Jet Propulsion Laboratory, overseeing accounts and campaigns across YouTube, Twitter, Facebook, Ustream.tv and Google+. She currently tweets as @NASAJPL and @Asteroidwatch, and is part of the "hive mind" behind @MarsCuriosity. Veronica launched NASA into social media in 2008 with @MarsPhoenix, the space agency’s first Twitter account, which rocketed to the Top 5 while the mission was ongoing. In 2009, Veronica organized NASA’s first Ustream.tv interactive broadcasts and she introduced the “NASA Tweetup” concept – events designed to bring the public behind the scenes at NASA centers to witness a mission firsthand. In addition to social media, Veronica manages traditional media efforts and oversees a video team that produces dozens of videos each year. In 2010 Forbes.com included her on their list of 20 Inspiring Women to Follow on Twitter, and in 2012 Mashable.com included her on their list of 15 Twitter Accounts Every Space Lover Should Follow. Before joining NASA-JPL, Veronica worked at CNN as a producer and assignment manager.