A Beginner's Guide to SXSW Film 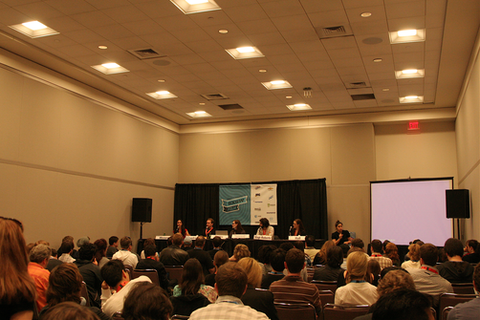 A nexus of discovery and collaborative energy, SXSW Film kicks off in high gear with their annual Beginner's Guide. Answering questions like how do I get around Austin during the fest? When should I arrive to get into my movie? How do I navigate badge lines and how can I be sure to hit the best parties? Veteran SXSW participants and locals will share best ways to navigate Austin, the festival, ways to maximize social media during the event and even where to find the best eats. Rookies should come armed with questions and learn the tips and tricks to having the best experience while at the SXSW Film Festival and Conference.


Agnes Varnum joined The Texas Tribune events team after five years in membership and marketing at the Austin Film Society. Before moving to Texas, Agnes held positions with Icarus Films, the Center for Social Media at American University and as a freelance writer for Indiewire.com and Documentary magazine. She has worked on the AFI Fest in LA, Independent Film Week in NYC, and she has served on programming committees for Silverdocs, Newport International Film Festival, AOL True Stories (now Snag Films) and SXSW.


Texas Monthly recently named David Modigliani one of the "next great Texas directors." In 2009, he co-founded branded documentary powerhouse Flow Nonfiction. David's feature-length documentary, Crawford, about the tiny Texas town George Bush turned into the Western White House, was a spotlight premiere at SXSW in 2008. He has made national appearances on MSNBC and CNN, and in the Wall St. Journal, to discuss his work. In brande work, he has directed pieces for Skype, Ford Warriors in Pink, Tide, the Houston Rockets, Downy, Sabertec, Texas Children's Hospital and Bing, among others. He has a BA from Harvard University and an MFA from UT Austin.