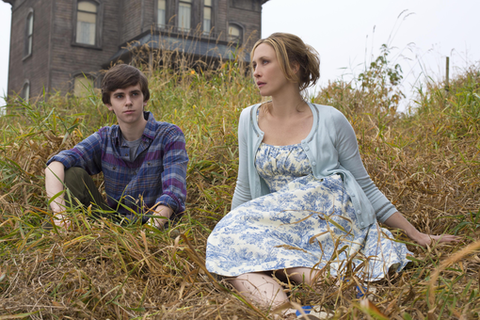 Catch an exclusive sneak peek of the first episode of Bates Motel, the thrilling new series from A&E starring Vera Farmiga and Freddie Highmore. The contemporary prequel to the genre-defining film “Psycho,” promises to give viewers an intimate portrayal of how Norman Bates’ psyche unravels through his teenage years and how deeply intricate his relationship with his mother, Norma, truly is.

Attendees will get a first look at the series and following the premiere, Guy Slattery, EVP of Marketing for A&E Network, will sit down with executive producer Carlton Cuse (Lost) for a discussion and Q&A on how the series came to be and how fans will have opportunities to go in-depth with the series' characters and plot points online.

Interactive registrants, don’t forget to sign up at batesmotelsxsw.eventbrite.com to attend the special premiere of A&E’s Bates Motel!