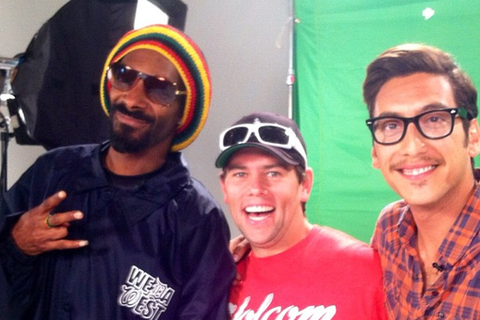 Explore what the future holds for content creators and the distribution of video with leaders and talent at the forefront of the digital revolution. Investigate how you create a model that thrives and what advice can be shared to help others succeed in what is an ever-evolving new media landscape.


For over five years comedian and actor Kassem Gharaibeh, known online as KassemG, has entertained millions of viewers with his hilarious videos and YouTube series. His ability to effortlessly make others laugh is perhaps one of the reasons he is one of the Top 10 most-subscribed comedians on YouTube with over 2.1 million subscribers. In his most popular format “California On,” Kassem conducts hilarious man-on-the-street interviews, covering a variety of topics. The show has garnered a number of award nominations and attracts an average of 1 million views an episode. Another popular series from Kassem is “Going Deep” which features comedic interviews with porn stars. Quick-witted and fast on his feet, Kassem has gained a loyal audience that is highly engaged with this YouTube icon.

After beginning his entertainment career as a stand-up comedian, Kassem discovered that the YouTube platform was a unique way to share content with a much larger audience. In 2008 he began his channel /KassemG followed by /KassemGTwo. Then in 2009, he joined forces with Danny Zappin, Lisa Donovan (LisaNova) and Ben Donovan along with other YouTube stars such as ShayCarl, to form a new kind of studio with a 360 approach to producing, creating and distributing original content—Maker Studios. The team began by launching the YouTube channel TheStation, which became a hub for talent to collaborate in the space. Kassem helped create the overall concept and model of this growing media brand, and continues to deliver exciting content to his channels that are a part of the Maker network—which now includes over 5,000 channels.